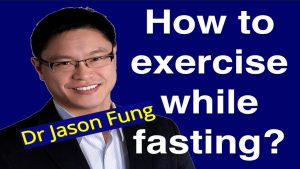 Dr. Jason Fung is a Canadian nephrologist, best-selling author, and world-famous leading person on how individualized fasting could help people on treating diabetic and overweight, metabolic ill patients. He has treated thousands of people, and many were able to return to their normal state, thanks to the various approaches followed in fasting. The following passage is all Dr. Jason Fung’s experience, shining light on what training means and the effects of fasted training.

According to Jason Fung, it is a marketing strategy to hail exercise as a fore-runner in weight loss. People often claim that the results of consuming two cookies get compensated by exercising for a specified period, which nulls the effect by burning the calories. Dr. Fung says that this isn’t a correct example as he clearly explains the process which starts taking place after the intake of the cookies.

Cookies contain sugar or refined carbohydrates which cause the blood glucose level to shoot up, and so the insulin level, the sugar enters into the liver and could create insulin resistance in the long term, thereby resulting in weight gain. People knew that eating cookies, sports drinks, or sugar-sweetened beverages could increase fat. Dr. Fung says that these food product companies use exercise as a marketing tool for their products, claiming that the ill-effects get neutralized as long as one exercises.

Exercise is different from the diet:

Dr. Jason Fung says that the benefits of training achieved are different from those obtained while dieting. During exercise, the body undergoes stress which leads to micro damages which get healed as a part of the body’s recovery processes, thereby it becomes stronger to face the ongoing pressure. For example, weight lifting could result in a micro tear in the muscle, which the body heals while taking rest. This recovery would end up in new stronger muscles. And so are Cardio and resistance exercises.

Dr. Fung also says that these exercises are not going to help the liver, as in the case of while consuming sugar, it will mess up with the liver, increase insulin level and regular exercises cannot reverse the damage caused by the sugar to the liver. The above conclusion is indeed from the experience of Professor Tim Noakes, who is a prominent person as a sports scientist. His miscalculation of offsetting the effects of consuming sugar by exercising paves the way for type II diabetes.

Though exercise helps in gaining strength, flexibility, etc…, it cannot be associated with weight loss. Dr. Fung says that weight loss and type II diabetes are due to a dietary issue that does not get resolved through routine exercise. And strengthening the body, bringing better flexibility are some of the things which can be delivered only through diet, and not through food.

Dr. Fung says that this primary misconception is because of marketing and sponsoring for research by giant food companies to universities and other people to convey that exercise tool to gain healthy weight.

As he goes on, he says that there is a general belief among people that one must eat well before starting an exercise. But Dr Fung shines a light on two critical aspects. One is training in the fasted state, and the other one is undergoing training on a low carbohydrate diet. Another misconception among people following a low carbohydrate diet is that muscle needs sugar to burn calories. Though Dr Fung states that this is not the real case, he acknowledges that the body needs some time for changing its mode from burning sugar to fatty acids.

He says that the muscle can gain energy either by burning sugar or fat. While taking a ketogenic or low carbohydrate diet, sufficient glucose level will not be available in the blood. So the muscle starts metabolising fatty acids as the triglycerides get broken into fatty acids, and the body begins utilising these fats and so are the muscles. But for a person who has never taken a fasting or ketogenic diet, the performance will go down for two to three weeks as the muscles were tuned to consume glucose. So, the person gets affected by keto flu (symptoms like headache, nausea etc…) on the initial stage. After the body gets adapted to burning fat, the performance improves.

The primary being the ease of metabolising fats and profound hormonal changes which takes place during fasting. What happens is that insulin goes down during fasting and the counter-regulatory hormones go up. As the glucose level goes down, the stored glucose has to be pumped into the blood to get energy, and the counter-regulatory hormones make sure that the body receives it.

The second benefit is the adrenaline and non-adrenaline part. The adrenaline and non-adrenaline are also responsible for augmenting the body with excess energy when we get pushed to the limits. And the third one is the growth hormone. As we start eating again, the growth hormone, along with the body helps in rebuilding the tissue at a faster rate. So, training in a fasted state results in both a healthy body and quicker recovery, unlike steroids which gives the same performance boost but with a heavy toll on health. Fasted training helps to achieve this upgrade effectively at free of cost. Fasted training is the reason for many athletes approaching them and helped to realise the benefits.

So, Dr Fung sums it up by saying that training in the fasted state helps us to achieve two things.  One is the benefit of switching to a low carbohydrate, leading to metabolising fat. The second one is the effects mentioned above on the sympathetic nervous system, growth hormone and adrenaline, non-adrenaline resulting in improved performance because of this hormone charge. Not eating does not mean that performance would take a toll; instead, the performance getting upgraded to the next level.

If one is willing to undertake this, one must give themselves a period of two to three weeks to get used to this technique before going ahead with fasted training.